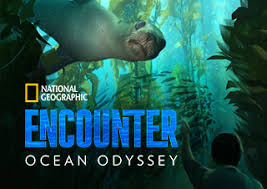 Through the hustle and bustle of New York City is the heart of Times Square which offers a variety of souvenir shopping, Broadway shows, restaurants and live entertainment. The newest addition to Times Square is the National Geographic Museum. This educational staple immerses you and your students into the wild life. The National Geographic is notable for their variety of non-fictional articles and shows based on documentaries, entertainment, politics, nature and music.

The new museum is based on the wildlife throughout the Pacific Ocean. Your students will encounter whales, sharks, dolphins, and much more. The technology the National Geographic museum provides will make you feel like you are stepping into their notable magazine past the yellow outline and into the ocean. This is a New York City site that you won’t want to miss. Contact your ETC Tour Consultant for more information.

Drama departments and drama clubs in high school and even junior high are filled with students who could benefit from a unique travel experience to a larger, more urban area, such as Toronto, or New York City. In these two North American cities, the Broadway theater district thrives. An international audience visits Toronto and New York City to see the newest, most popular Broadway plays and musicals.

New York City and Toronto: The Best of Broadway
As a student travel tour consultant, I have specialized in bringing theater groups on performance tours that include pre or post Broadway show workshops to enhance the theater going experience. These unique active learning experiences offer the perfect academic complement to an evening of theater in New York City or Toronto.

A High School Musical Tour to Broadway
Combine a trip to Broadway play or musical with a visit to an authentic Broadway Classroom Basic Workshop. In the past, students have seen such famous plays as Wicked, The Lion King, and Phantom of the Opera on Broadway in New York City or in Toronto. Prior to watching shows, Broadway actors and actresses describe and illustrate their professional, highly visible roles on Broadway and offer education and insight about the professional theater industry and their craft.

Active Learning for Educational Group Travel
Students learn a great deal in the Broadway Classroom Basic Workshops. In many instances, it is Broadway actors themselves teaching classes in Toronto and New York City. Students come to understand that work in professional theater has its rewards as well as challenges and demands. Student travel groups involved in drama departments or drama clubs gain an insider’s viewpoint on the theater community, and its inner workings, in these major cities.

Broadway 101
In this drama workshop, students will be given a fresh overview of the artistic, political, and social significances of Broadway Theater. They will come to understand the special training involved in becoming a Broadway actor or actress. Drama students gain valuable lessons in voice, storytelling, and focus/listening exercises in the Broadway 101 workshop.

Theater in Context
The subjects of Broadway plays and musicals are derived from many different cultures and time periods. Learning about the historic and literary periods that the Broadway show was created within assists a drama student to widen his or her perception of the work when he or she sees it performed.

Stage Combat
This safe, student friendly workshop illustrates the way in which fights and other forms of combat are staged in contemporary theater. Professionals show students how collaboration and spectacle combine to make combat seem real on stage.

Theater Sports
This workshop shows drama students and drama club members how to work as a team to communicate effectively and create great scenes. Students will learn about increasing focus and attention, activating their creativity, and attuning themselves to the sensitivities of others.

Attending a Broadway play or musical is an exciting event, for any student. Yet for a drama student or drama club member, Broadway can actually be a professional goal. By attending the Broadway Classroom workshops, the educator is encouraging student travel groups to attain this lofty goal, and grounding it in some reality. For many students, a real glimpse into behind the scenes of Broadway inspires the dream, and helps shape it for the future. Visit Educational Travel Consultants for more information on the performance tour to New York City or Toronto.